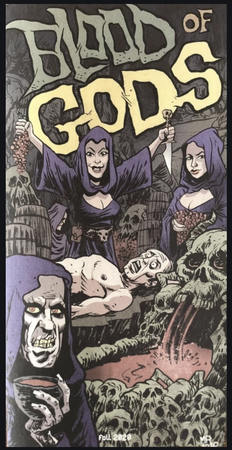 Blood Of Gods is a newsprint publication that aims to meld two seemingly disparate worlds together. At first, the intent of the zine was an adolescent retort to beer getting all the fun and limelight as the go-to drink when heavy metal was being enjoyed. It was also a pithy, contrarian attitude to force these two seemingly oh-so-different scenes together, like a scolding parent trying to get two battling siblings to make up after a fight (“Now get along you two!”).

However, it quickly became clear that the initial intent was missing the point. The truth is, these two realms have way more in common than they have differences. Larger than life personalities, flash-in-the-pan trends, critics, reviews, thrills, blood, sweat, and tears. And on, and on... wine and metal each have more than their fair share of these tropes that keep them exciting and keep their devotees coming back for more, over and over. The gatekeepers and figureheads in either camp might spin the narrative that keeps the status quo happy, and tired stereotypes in check, but metal and wine DO, in fact, go together. Blood Of Gods is meant to celebrate both camps while having some fun in the process.

The zine is not-for-profit. All net proceeds are donated to the Blue Mountain Humane Society. So while we think audiences would appreciate its humor, insight, and distraction from the day-to-day, any copies bought help doggies get fed, kitties get their shots, and furry friends find homes. But more than just a charity, this zine actually boasts some great content to back up its altruistic aim.

On the wine side of things, there are interviews and words from Pär Strömberg (WineTable.se), Kristin Bacon (Sip Northwest), Sigurd Wongraven, and more. Musicians such as Paradise Lost, Satyricon (Sigurd – again!), Fleshgod Apocalypse, and others make appearances. There are reviews of wine, albums, pairings, and write-ups including how Cannibal Corpse are the Cabernet Sauvignon of Death Metal, and with all original art from acclaimed comic book artists and designers!