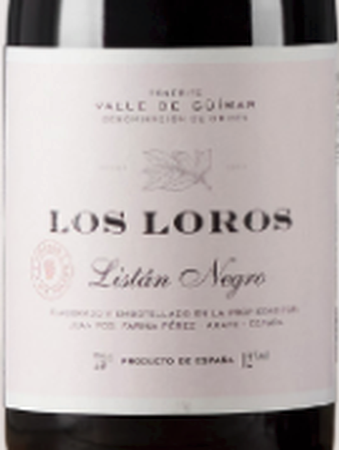 Juan Francisco Fariña Peréz (known as JuanFra to his friends) is a progressive winemaker in the Valle de Güímar, a small DO along the eastern coast of Tenerife. JuanFra has been making wine in the area since the early 2000s, and has some of the most respectful views on farming and winemaking in the area.

Güímar is an area known for white wines, typically made with Listán Blanco, the ubiquitous white grape of the Canary Islands. It received DO status in 1996 and currently consists of 12 wineries. Ranging from 100 to 1400 meters in elevation up the slope of Las Cañadas del Teide, it includes some of the highest elevation vines in all of Europe. Trade winds coming off the Atlantic help to keep temperatures moderate (these are known as the Alisos winds), rainfall is minimal and sunshine abounds. JuanFra’s winery is located within the center of the DO, in the town of Arafo at 700-800m elevation, and most of his vines are in the surrounding area.

Juanfra calls his project Los Loros, after the laurel shrubs that proliferate the upper parts of the Valle de Güímar. Conventional farming is typical in this area of the island, however Juanfra believes in a more holistic style of farming. Favoring a sustainable philosophy, he enjoys showcasing traditional Canarian varietals such as Listán Blanco, Vijariego Blanco, Marmajuelo, Albillo Criollo (no relation to the albillos found on the Peninsula, but a typical varietal found primarily on the island of La Palma) and Listán Negro. He owns most of his own vines, and also works with small farmers in the area, promoting sustainable practices among them. The Los Loros bodega is no bigger than a one car garage, yet Juan Francisco is doing great things in this little-known territory of Tenerife.

Los Loros Listán Negro cuvée comes from mostly Listan Negro vines, plus a little Tintilla and Listan Blanco. The wine is foot-trodden whole cluster before being spontaneously fermented and aged in used French oak barrels for several months before being bottled without fining or filtration and only modest amounts of added SO2.