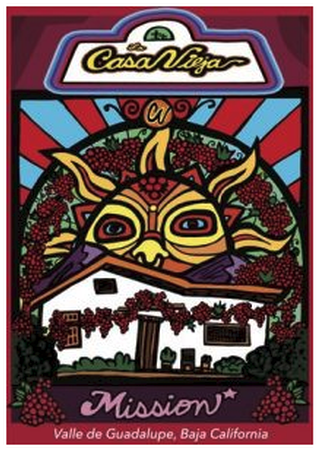 La Casa Vieja is iconic viticulture of Baja California, which has an overlooked but equally important vitis history to Mexico’s better known neighbors to the north. Eighteenth-century Spanish Missionaries in Baja had a recipe to slake the thirst of their religious congregants: build a mission, plant a vineyard. They began in Las Californias Altas of New Spain (present day California) before heading south and branching throughout Baja California’s rugged landscape.

This nearly forgotten vignette is one that winemaker Humberto ‘Tito’ Toscano was content sharing only with those lucky enough to stumble upon his 1800’s adobe ranch in San Antonio de las Minas, a sub-valley of the Valle de Guadalupe. Humberto was born on the property and returned in 2003. He nursed it back to health and has nurtured it ever since. Honoring history and taking a cue from the padres—his father, the missionaries, and local farmhands—Toscano tends his 120+ year-old, dry-farmed, original-rootstock-vineyards, including Mission and Palomino, naturally. When asked if he every sprays his vineyards, Humberto responds, “With love and wisdom.”

“The Mission vines are 120+ years old (some have speculated older), while there is a 150+ year old ‘Mother Vine’ that anchors the property. The vineyard goes up a gentle slope on the back of the estate. Harvest usually starts in mid September, but can last over a month. It’s destemmed by hand, massaging bunches over a kind of wooden zaranda. The grapes are then crushed by foot and transferred to plastic drums and one 450 liter concrete egg for fermentation and maceration. After native yeast fermentation, which takes about 2 – 3 weeks, the grapes are   pressed off with a small, wooden, 55L, hand crank basket press and racked into to neutral, 225 L oak for 6-8 months. Before bottling, the wine is transferred to glass carboys. Everything is racked and nothing is filtered or fined. The entire bottling process, down to labeling, is done by hand. No sulphur is added at any time. ”