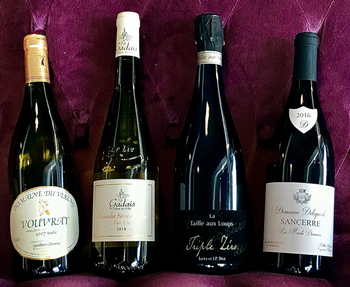 Les Monts Damnes translates to The Damned Mountains, arguably best terroir in Sancerre. Located in Chavignol and operating since 17th century, thhe grandson took over in 2010.

Terroir - Granite, near Atlantic coast in Nantes, at the confluence of the Sevre and Maine rivers.

Vinification - fermented in tank, aged at least 6 months on lees.

Pierre-Henri Gadais is a rather young, 5th generation winemaker (early 30’s). 50% of production from the estate is exported. 47 hectares broken into 120 different plots. Copper has been eliminated in the vineyard and compost is added to the vines.

Terroir - Silex, not Tuffeau that is more common in Vouvray. Northern tip of appellation.

Style - Tendre Sec or tender dry. Almost like Halbtrocken or feinherb riesling. Some residual, but lots of acid too. Sugar levels vary from year to year.

Owned by Lionel and Francoise Gauthier

Formerly a polyculture farm with 2 hectares of vineyard
grandfather of Francois Gauthier killed by Nazis during war because he was trying to blow up train tracks.
Expanded vineyard shortly after, now 13 hectares

“It can be said without any equivocation that Lionel Gauthier can eat more sweetbreads than you can.” – from Eric Solomon

Allows for the three “Zeros”

Aged on the lees for 24 months