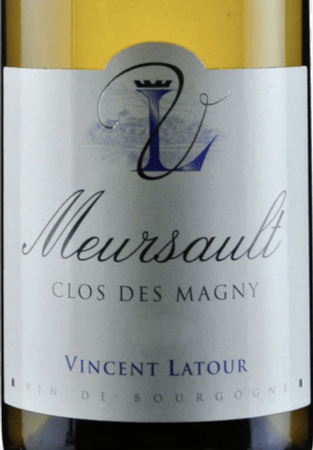 From a .93 hectare parcel planted in 1979 to 1983, located just below the village of Meursault. Fermented and aged in demi-muids on the lees (no stirring) for 12 months.

Although the Latour-Labille family has been making wine since 1792, Vincent Latour began turning heads in Burgundy after the release of his 2006 vintage when he was nominated as winemaker of the year by the well-respected local magazine, Bourgogne Aujourd’hui. He has also been recognized several times as the best new/young winemaker in the Côte de Beaune and in the Côte de Nuits as the result of an annual blind tasting hosted by local vignerons.

Vincent is hand-crafting exceptional Meursault from eight hectares of vines. His father used to sell off their grapes, but when Vincent took over from his father in 1998, he decided to bottle all of their production, roughly 4,000 cases. Vincent made some improvements over the years, including using whole cluster fermentation, integrating demi-muids and foudres into the mix, and a longer élévage. A mix of used and new demi-muids, barrels, and foudres are used for aging in order to have better control of the oak influence. Work in the vineyard follows lutte raisonée methods and native yeasts are used for fermentation. After pressing, must goes into 600L barrels or foudres.

The name of the winery was changed from Latour-Labille to Domaine Latour starting with the 2010 vintage.